MTW Ltd recognises the importance of Traveller culture, history and identity. We also believe in sharing this unique part of Irish life with the wider community. By literally setting this scene, visitors can visit the camp and spend time learning about what Traveller life was like fifty years ago.

The 1950’s was a period of change for everyone in Ireland and it’s a time that is still within living memory for many people. It was the last time traditional Traveller life was fully intact. Soon after, a move to towns and cities begun and their time honoured skills of tin smiting and crafts became less wanted.

In recent times, there has been a huge resurgence of interest in Irish history and in particular, Irish Traveller history. We hope that this Living History Project will give groups an appreciation of Traveller culture and bring a vital part of our history back to life. 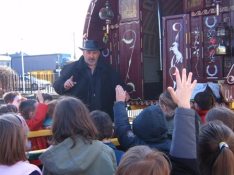 So far, the exhibit has visited many local schools and groups. If you would like us to visit your group anywhere in the country, please contact us to for more details on 046 90 27801.

If ever there was one symbol that represents traditional Traveller culture, it is the wagon. Colourful, practical, comfortable and warm it was home for thousands of Traveller families over the years.  It is the enduring image of a time when Travellers were treasured as skilled crafts people, welcome musicians and a vital part of Irish life.

Restoring a traditional Barrell Top Wagon has been one of the most successful projects the Workshops have ever run.  In early 2006, three men from Meath Travellers Workshops Ltd began work, using an original wheel base.

The wagon was officially launched as part of Navan Traveller Focus Week June 2008. Since then it has become a favourite fixture at local fairs and family days around the country and has even visited Stormant in Belfast and appeared on RTE television. The wagon plays a leading part in our “Living History” programme and has had many extremely popular visits to local schools to help illustrate Traveller culture.

Travellers have been part of Irish society for centuries. We have our own history, culture, language and traditions that make us a recognisable and distinct group. There are an estimated 30,000 Travellers in Ireland.

It is commonly thought that Irish Travellers were originally people who lost their land and homes during the Famine, however this is not the case. As early as the 12th Century, “Tinkers” are mentioned in Irish records and refer to travelling crafts people who were very important in the daily of life of the time. 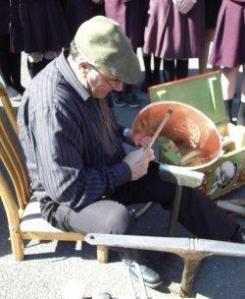 Travellers have our own language, which is called “cant”. This is a language mostly used by Travellers to speak with each other. These days, it is stronger in some families than others. MTW Ltd believe that Cant is a valuable and unique part of our heritage and have worked hard in recent years to preserve, record and teach it to younger Travellers.

Traveller occupations in the past included tin-smithing, farm labour and door to door sales and recycling.  Today many of these occupations have become obsolete with many Travellers now turning to market trading, scrap collecting and antiques dealing.

A small number of Travellers have their own businesses, others are employed by community enterprises established by Traveller groups (such as Meath Travellers Workshops Ltd.). However in Meath especially, more Travellers are succeeding in becoming Teachers, Health workers and Community Workers.